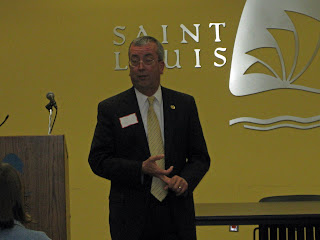 1. What do you view as the key role, and/or attributes needed, for this position?

I think the key role for a Democratic State Senator in the Missouri Senate is to represent the interests, not only of Democrats and progressive values, but to protect policies that are crucial to St. Louis. Historic Tax credits are a good example. Much of the 15th Ward has been revitalized because regular citizens were able to utilize these tax credits. There are Republicans and rural legislators who do not understand the value these programs bring to our city and State and want to limit them. I think your Democratic Senator needs to be a voice for progressive values but also a voice for the city as well.

2. What experience / attributes do you have that qualify you for this position?

I have been involved in Democratic politics for all my life and for nearly the last 10 years I have been 28th Ward Democratic Committeeman as well as Treasurer for the City Democratic Party. Before becoming your State Senator, I worked in the financial industry as a securities lawyer, most recently for US Bank. I am a lawyer and an MBA and right now I love representing my community in the Missouri Senate. I consider it an honor to represent you.

3. Why do you think you are the best person for this position? What differentiates you from your opponent(s) (if applicable)?

I already am the State Senator and am finishing up my first session and already have an agenda that focuses on a variety of issues that I feel are important to making Missouri a better state. My years in Democratic politics and background in the private sector actually makes me one of the most experienced State Senators on the issues of banking regulations as well as pension systems which are an issue facing all state and local governments right now. I also have a passion for politics and standing up for democratic values which I have done for many years. I can’t say that my opponent does not know anything about these issues, but if he has been involved with the community politically or advocating for democratic causes it is not something that I or anyone else I know is aware of.

4. What do you feel are the most pressing issues currently facing this office?

The most pressing issues that a Democratic Senator faces in Jefferson City is being able to work protect important issues for our community while having to work in an environment that has a Republican Super-Majority. The Democratic caucus is so few that we cannot filibuster effectively. So I have to build good working relationships to affect positive change for St. Louis and the people of the 4th District. Specifically, legislation to cut Historic and other state tax credits are being debated in Jefferson City. These programs are directly responsible for revitalization of Downtown and many neighborhoods here in St. Louis.

5. What plans do you have for addressing these issues? (please be specific)

I have been building strong relationships with members of both parties in the Senate. If fact, the reason I was able to pass Local Control out of Committee was because of my ability to gain support from my Republican colleagues. The two Democrats on the Committee voted against my bill.

6. How would you effectively represent Democratic interests in Jefferson City as a member of the minority party?

As for protecting Democratic Values, I and my colleagues can threaten to filibuster, but the GOP majority is so large that they have the ability to break a Democratic filibuster. So far this session, I feel that Democrats have been able to work for compromise on some issues and threaten filibustering others to keep legislation from being too one sided.

7. What is your position on local control of the police department?

I strongly feel that the City of St. Louis and the Citizens of St. Louis deserve to control and have direct accountability over their own Police department. In fact, I sponsored SB 643 which would return local control back to the city. I was able to get it passed out of committee and am currently working to bring the bill to Senate floor this session.

8. How would you propose to solve the budget problem of increasing pension costs for City of St. Louis employees?

I believe that all public workers should receive pensions, but there is no denying that the City’s increasing pension costs have become a problem. I think we need to take a look at the costs, what we need to contribute to keep these funds solvent, and examine the benefits to find savings without changing from a defined benefit plan. We definitely need to sit down with our public employees’ unions and come to a compromise on benefits that satisfy their members but allows the city to a more financial flexibility in keeping the pension funds solvent.

9. How would you work to foster economic development in the City of St. Louis? Please include your views about historic tax credits.

Right now, many of the tax credits we use as economic development tools are in jeopardy of being cut drastically. I oppose doing this, but in the worst budget crisis the state has seen since the Great Depression there will probably have to be some sort of temporary compromise. I plan to work to protect as many tax credits, especially Historic Tax credits as I can. This year we are in more of a protection mode because of budget issues rather than spending more.

10. In the role of State Senator, what could you do to improve the educational system in the City of St. Louis? Please include your views on school choice and funding.

I believe that education is the missing component to many of our efforts to revitalize our city. The St. Louis Public Schools is the largest district in the State of Missouri and it continually fails the most children. While we have good schools in the district, we also have the very bad. I strongly believe that it is our responsibility as a city to provide quality public education to our children. So while many of our public schools are failing, I support charter schools that provide an option to parents to provide a free public education for their children. I do not believe that parents should be forced to send their child to a failing school. I think charter schools provide a free option to parents who are not satisfied with the SLPS District. While I support fully funding the foundation formula, I am not convinced that all the problems with our school district stems from a lack of funding. I agree with President Obama that we need more teacher accountability and continuing education to improve our public school systems.


11. Missouri lags behind many states in terms of alternative energy, energy efficiency, etc. What are your views on these and other environmental issues?

I am very supportive of alternative energy and and increasing energy efficiency here in Missouri. Here and nationally we are going to run into an energy shortage in the coming years and we need to create policies that encourage cleaner energy such as solar and wind as well as creating a more efficient systems.
Posted by Jan at 9:49 PM